In a shocking new discovery, researchers at the Human Genome Project discovered an unusual artifact hidden deep within a recently parsed set of genetic data. Unlikely as it seems, we have to consider the possibility that a particular coded sequence of base pairs in a sample taken from a Mrs. Fiona Lostmyhandbag of the tiny Scottish village of Nothindhuin may have a pointed message. We must also consider that this may be undeniable evidence of an intelligent creator. The only catch is that the intelligent designer is none other than Oxford evolutionary biologist Professor Richard Dawkins.
The transformed data sequence here shows an unmistakable imprimatur: (apologies to dnai.org for hijacking its chromosome closeup graphic) 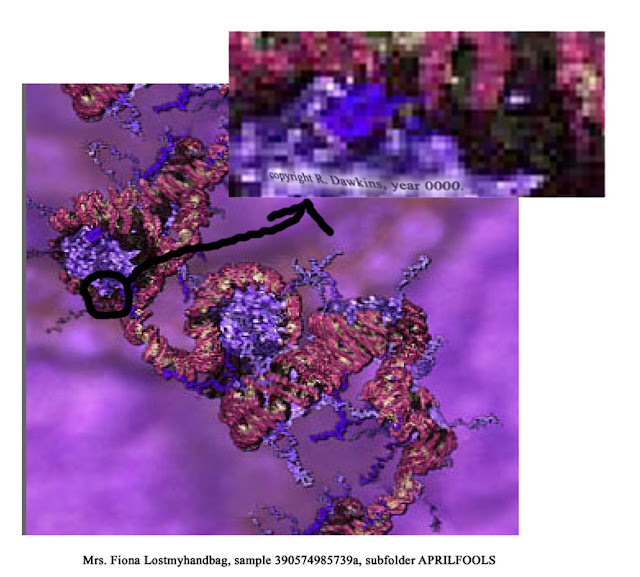 The chances of such a complex coded message appearing by natural selection and random mutation are infinitesimal; so scientists have had no choice but to declare that Richard Dawkins is most likely God, the long-sought intelligent designer of the human race. When asked for comment, Dr. William Lane Craig said, “See, I told you so,” before promptly calling Professor Dawkins to congratulate him on his promotion.
Dr. Dawkins was asked to comment on his newfound status as Creator and Ultimate Deity. His reply was simply, “That’s bullshit.”
Critics of the “Dawkins is God” movement have countered with a claim that Dawkins may only be the creator of Mrs. Fiona Lostmyhandbag and no one else. Mrs. Lostmyhandbag was sequestered with the officials of the British Railways Lost and Found and could not be reached for comment, although her dog, a Chihuahua named Charles Darwin, had much to say on the matter.
*AFN: April Fool’s Network :D
Posted by Sadie Heilemann at 7:53 PM