The Hardest Part About Trying to Clean in a Hoarder House

I'm married to a hoarder, albeit a hoarder with taste (well, sometimes). He collects everything if it is older than about 1975 or so. I have a huge 1950's furniture-grade television (nonworking) and a Victrola (working) in the living room. Today, I tried to organize the living room, and I had to move these monstrosities, along with a large set of metal shelves. The problem is that the house is full of crap! So, in order to move these three pieces of vintage/antique furniture, which took all of about 10 minutes total, I had to clear about 20 boxes, repack some of them, vacuum around and under many structures and wipe away the residual dust that didn't respond to the vacuum. The project took about 3 hours, but I can see floor space I haven't laid eyes on in over a year, and I got the HUGE Sentinel television in the corner where it belongs (until the unlikely event of its being fixed). The Victrola is now much more accessible, so I can listen to those many pre-1925 78 records that now sit next to the unit instead of underneath an intricate do-it-yourself clock kit and several items of discarded clothing.

I'm not a neat freak, which is probably helpful when one is married to a hoarder. In fact, I've found the tendency kind of wears off on me. I have far more items of oriental decor than I can ever display in this rather small, one-bedroom log cabin. But I work hard to keep the clutter at bay, and I almost never stop cleaning, unless of course I'm mowing the lawn. But then that's a form of cleaning too, isn't it?

I suppose I'm proud of myself today, because, for once, you can actually tell that I've been laboring all day to make the house look better. On normal days, my activities only succeed in keeping the kitchen free of food waste, the entryways relatively free of the grass, dirt and straw the dogs drag in from outside and the mildew out of the shower. Now I'm exhausted. Just for a small treat, here's a mostly unobstructed view of my now-visible Victrola! 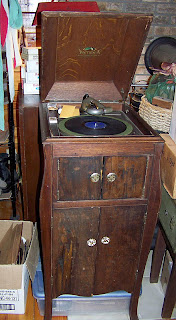 Oh yeah, if you look behind the Victrola, there can be seen the Sentinel television in all its grand, vintage non-working beauty. It's a pretty piece of furniture, but it'd be nicer if it was a working television! For now, it is a lamp stand. Cheers y'all!
Posted by Sadie Heilemann at 1:45 PM No comments:

The Japan I Want To See: Nakasendo Post Towns and Haikyo

There’s nothing like standing inside a hollowed out stone structure, looking up into the exposed sky, to give one a sense of passed time. I live in rural Tennessee, and there is a small town about 10 miles away that has several buildings that are nothing more than ruins. A larger town about 20 miles away shows its age with a fading block-sized Coca-Cola logo on its brick façade. I find myself dreaming of finding places like this if I am ever blessed with the opportunity to visit Japan.
Having a penchant for late Tokugawa era history, I have an itch to walk the Nakasendo, the old post road that snaked through central Honshu. About halfway between Edo (yeah, sometimes I still call it “Edo”) and Kyoto is a preserved historical post town: Tsumago. After World War II, this post town was designated a historical preservation site, and care was taken to keep it looking much like it did in the days of the Tokugawa Shogunate. This is partof the Japan I’d like to visit.  And I’d like to visit it before my knees prohibit my walking the old paths of the Nakasendo, in waraji (straw sandals), just like they did in the old days! Yes, I own a pair of waraji, and they are quite comfortable when worn with tabi. But they’re not very durable. I fancy sometimes as I walk down my barely paved rural road here in Tennessee that I am a traveler in the great Kiso forest, a rural commoner who perhaps has never seen Kyoto but would really like to go someday. If I can just make it up the Magome pass…
Out here in the sticks of Tennessee, the only hints of culture are the houses, and there are often long stretches of forest and field, with cows, goats and waving cropland. It is not too difficult to apply one’s imagination to bring this scene to Japan, especially after reading the detailed descriptions in Shimazaki Toson’s “Before the Dawn.”
But the carefully maintained Tsumago post town is but a beautiful illusion created by careful craftsmanship. I also have a fondness for history in its ruined state. The most beautiful buildings I’ve seen in Alabama and Tennessee are often incomplete, open structures, many overgrown with vines of kudzu or wisteria. On my own land here in Southern Middle Tennessee are remains of ruined house foundations, only a small hint: 10-12 well-placed stones, with a collapsed barn a short ways away, broken jugs that speak to moonshine nights in the nameless and unrecorded past.
I imagine seeing analogous sights in the hidden places of Japan. I would love to take the “haikyo tour” and view the fallen houses, hidden shrines, the forgotten remembrances of emperors of antiquity whose memories almost disappeared before the Meiji Restoration. There is something evocative in ruins. See this wonderful site that contains many excellent photos of abandoned structures all across Japan. When one looks at ruins, ghosts arise, and they speak of the history that was not recorded in writing. Even the modern haikyo like abandoned amusement parks, such as the one represented in Miyazaki Hayao’s “Sen to Chihiro no Kamikakushi” (“Spirited Away”). I am sure this ghostly presence is an aspect of wabi-sabi that I can never truly define. Instead, I dream of these images. I hope to visit Japan and see them firsthand someday. And I plan to have a good supply of waraji when I do!
Japan Blog Matsuri: "Reasons to Visit Japan" (let me count the reasons...oh wait, there are too many!)
A beautiful website that takes you down the Nakasendo Way!
Thanks to the Japan Blog Matsuri folks for giving me the wonderful idea for this post, and I only hope I'm not the late visitor to the party!

Why on Earth is it called "Tennessee Terakoya?"

初めまして！First, let me tell you I didn't brainstorm or sit around trying out cool-sounding names before I came up with this. It was simply a matter of wishing for an alliterative descriptor to go with "Tennessee," which is my base of operations. A terakoya is a school run out of a Buddhist temple usually, that teaches boys, girls, and often young women the arts and sciences of feudal Japan in the Edo period (1603-1868): reading, writing, history, tea ceremony, ikebana, the use of the soroban (abacus) and such. Now I'm not really a soroban whiz, but I'm pretty good at algebra! I do have a soroban around here somewhere, so when I learn to use it, I'll post my experience here! While I'm not necessarily qualified to teach all subjects to all people, I find the idea of a rural online "terakoya" or Temple School to be appealing, as much of my online life is devoted to learning more about the world and especially about Japanese history and culture. So I'm both teacher and learner. For that purpose, I utilize this particularly helpful Japanese language learning site: Nihongoup . Also this wonderful, active forum for the pursuit of all things Japanese (especially the history of the Samurai) is here: Samurai-Archives Japanese History Forum. There are many more ways to connect with the history and culture of this most fascinating country, but, as I am, for the most part, stuck without a car in the deepest of rural Tennessee 'hollers, I rely on the internet, printed word and Netflix (for entertainment).

Anyway, I hope you'll enjoy reading my blog, and feel free to contact me here if you have any suggestions for great subjects to pursue at the old rural Terakoya!
Posted by Sadie Heilemann at 11:23 AM No comments: