This wasn't particularly well thought out or anything, but I went into this short Photoshop project with the intention of creating an entry for a Cracked magazine photoplasty contest "What if famous personages of history were born in the wrong era?" or something to that effect. When I finished it, I realized that there was no specific single historic personage represented beyond the fact that the original painting used was created by Jules Brunet, famous French combatant on the side of the Bakufu forces in the Boshin War of 1868-9. In my photoplasty, he is the field "photographer" of an out-of-time event that wasn't supposed to happen in Japan (well, arguably, ever!) until 1945.

So, without further ado, here is my photoplasty of Japan's premature atomic solution to the Restoration war. The question remains: who in Japan could have invented the bomb in the mid-19th century? But let's not overthink this. 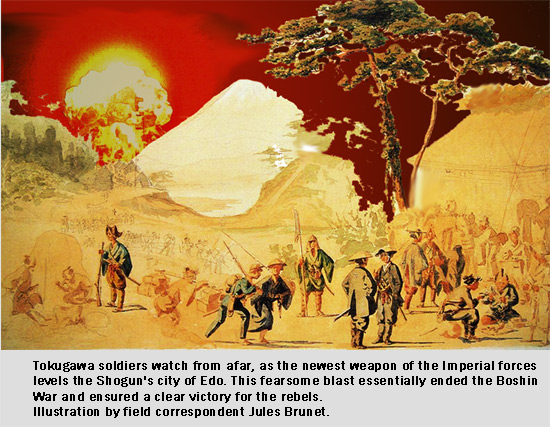 Posted by Sadie Heilemann at 9:44 AM No comments: